Excerpt from the new book
What's a parent to do? How to give your child the best education in America

​STRATEGY 1: Make home not only loving and safe, but also fun and interesting

“Home is the place where, when you have to go there, they have to take you in.”[1]

For most people, home means more than simply not being turned away, but imagine if a person did not even have that assurance. Babies are still being abandoned at an alarming rate in the United States.[2]Worldwide, millions of young children are separated from their parents every year.[3] How would your life have been different if your parents had left you, unclaimed, at the hospital?[4] What if you had grown up having no place to call home?

The Skeels studies
In the early 20th century, when safeguards for research involving children were not widely adopted, a psychologist named Harold Skeels did a fascinating study of the power of the family unit.[5]

Skeels, who ran an orphanage, worked with 25 children, up to the age of two-years-old, who had been illegitimate and given up for adoption, or who had been abandoned or abused by their parents and taken away. One group, let’s call them Group A, consisted of 13 children, who were determined by staff to be “mentally retarded,” meaning that they were of below average intelligence. A second group of 12 children, Group B, were determined to have above average intelligence.

Skeels made the “mentally retarded children” of Group A eligible to be adopted by families and these children were quickly placed. In their new families, the children from Group A were able to establish positive rapports with “mother- and father-surrogates” and siblings in a home setting. On the other hand, the children in Group B, the smarter children, were not put up for adoption, but remained in the “non-stimulating environment” of the orphanage.[6]

Skeels tested the children from the two groups two years later and found dramatic shifts in intelligence. During the two-year period, the “mentally-retarded” children of Group A who had been adopted had increased their intelligence by an average of 28 points, from below average to above average, while the I.Q.s of the initially more intelligent children, who had not been adopted, declined by an average of 26 points, from above average to below average. The 54-point transformation (Group A up by 28 and Group B down by 26) became apparent after only two years![7] For experts in psychometrics, an increase or decrease of only a few points on an intelligence test could be considered significant; 54 points is absolutely astonishing.

Figure 1: The effects of adoption into caring families, 20+ years after adoption (Skeels) 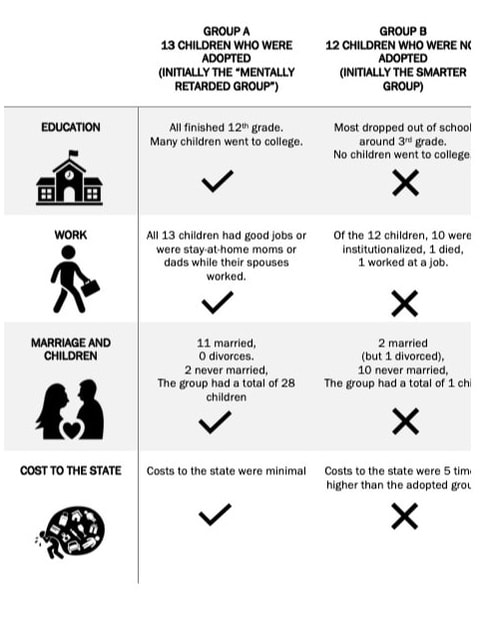 A major finding of the Skeels studies, corroborated by hundreds of subsequent adoption studies,[11] is that the quality of the relationship with a caregiver is paramount. The caregiver does not have to be related by blood and does not have to possess any particular characteristic other than a willingness to spend the time and effort required to demonstrate care.[12]

Lesson one from the Skeels studies: Growing up in a loving home greatly improves the probability that a child will be smart, healthy, and well-adjusted.

More recent research has confirmed Skeels’ initial conclusions about the devastating effects of neglect on a child’s development, but with a twist.[13] With newly available technologies, neuroscientists have found that a lack of care actually damages the physical structure of a child’s brain.[14] Perhaps surprisingly, neuroscientists have found that a caring environment, but one that lacks stimulation can also hinder brain development.[15]

The ideal home environment should not only be secure, but also pleasant and intellectually interesting.[16]While safety is good, “low levels of stimulation…result in negative psychological effects upon children’s development.”[17] An active, fun, supportive home environment is necessary to foster healthy brains and happy children.[18]

This is a critical point that many well-intentioned parents fail to heed, so it is worth restating. The ideal home environment should not only be safe and nurturing,[19] but also pleasant and intellectually interesting.[20]

The famous hierarchy of human needs
As with any well-known theory, the hierarchy of needs developed by Abraham Maslow has its proponents and detractors,[21] but the original conception of needs having five levels--physiological, safety, belonging, esteem, self-actualization--is brilliant—and a useful framework for parenting.[22] The hierarchy of needs originally was conceived as a ladder. Maslow never created a pyramid and he did not like how representations of the hierarchy of needs as a pyramid implied that basic needs were somehow distinctive “stages.”[23]

Some children may try to meet several different kinds of needs simultaneously. During times of catastrophe, a child might quickly move down the ladder, not up. Metaphorically speaking, a child might have their feet on a lower rung of the ladder, while their hands occupy a higher rung.[24] They may suffer from malnutrition and fear for their safety while they are also seeking to self-actualize, for example.

About the hierarchy of needs, Maslow writes that

…reversals of the average order of the hierarchy are sometimes observed. Also, it has been observed that an individual may permanently lose the higher wants in the hierarchy under special conditions. There are…multiple motivations for usual behavior, but in addition many determinants other than motives.[25]

At the bottom rungs of the ladder are survival and safety, the need for access to sufficient food, water, rest, and shelter.[26] It is well established that a child who is hungry or who feels threatened may struggle to concentrate on anything other than satisfaction of unmet basic needs.[27]

Psychological needs, such as a sense of belonging and self-esteem, affect how children see the world and how they come to view their own place in it.[28] Children whose basic needs have not been met and who have failed to form healthy attachments early in life tend to 1) be mistrustful, 2) have low self-esteem, and 3) hold a pessimistic worldview.[29] On the other hand, children whose basic needs have been met and who have developed healthy attachments typically tend to 1) be trusting, 2) have healthy self-esteem, and 3) hold optimistic worldviews.[30]

Story
A childhood friend of mine had a mother and father who always fought. The dad was a sometimes employed, volatile alcoholic who would disappear for weeks at a time. One day, when my friend was about five years old, his mother packed up a suitcase, put him in the car, and they drove to California. The mother knew no one in the state, had no money, and took a job at the first place that offered one—a 24-hour restaurant located close to the beach. They lived in their car in the parking lot behind the restaurant for about a year. My friend slept in the car while his mother worked the night shift as a waitress. During her breaks, she would walk out to the car to check on him. He used the public toilet and the open shower at the beach as his bathroom.

My friend does not recall the time with anxiety or horror; it was just life as he knew it. From his perspective as a 5-year-old boy, living in the car with his mom seemed like a pretty good life, certainly better than living in a house where his crazy dad might show up and start shoving him and his mom around. Home can be anywhere—a shack, a mansion, a tent, a car—as long as it is a place where a child can feel cared for, a place that is interesting, a place where the child will never be turned away.

[4] I was shocked to learn that baby boxes have been installed in some fire stations so that parents who want to abandon their children have a safe place to do so. See Celeste, E. (2016, May 25). Baby box offers ‘safe haven’ for abandoned newborns. Voice of America.https://www.voanews.com/usa/baby-box-offers-safe-haven-abandoned-newborns

[5] Skeels, H. (1966). Adult status of children with contrasting early life experiences: A follow-up study. Monographs of the Society for Research in Child Development 31(3), 1-65.

[6] Skeels, H. (1966). Adult status of children with contrasting early life experiences: A follow-up study. Monographs of the Society for Research in Child Development 31(3), 1-65.

[8] Skeels, H. (1966). Adult status of children with contrasting early life experiences: A follow-up study. Monographs of the Society for Research in Child Development 31(3), 1-65. Citations on p. 55.

[10] Skeels, H. (1966). Adult status of children with contrasting early life experiences: A follow-up study. Monographs of the Society for Research in Child Development 31(3), 1-65.